If you are interested in educational technology, want to be inspired by ideas from other schools and understand better how to lead the implementation of technology in schools then this podcast is one you might be interested in listening to. This podcast while called Leading Change is not just for school leaders. The podcast discusses and shares what students are doing and how it has impacted on their learning and there is a lot to be gained by the classroom teacher who is interested in developing their use of technology with students. Episodes are approximately 20 minutes long.

A dynamic behind the scenes look at how school leaders across the Asia Pacific region deal with the rapidly developing technological age. Those leading the change take you on a passionate, inspirational and honest journey through the planning, implementation and evaluation of classroom technology. iTunes Description

I believe this Podcast is only available in iTunes. You can access it through the Podcast app by Apple or open iTunes on your computer and select Podcasts and type in Leading Change: The Technology in School’s Podcast into the search bar to download episodes. 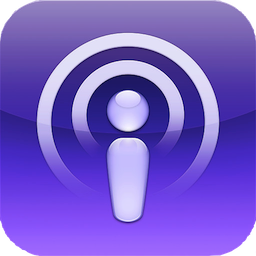 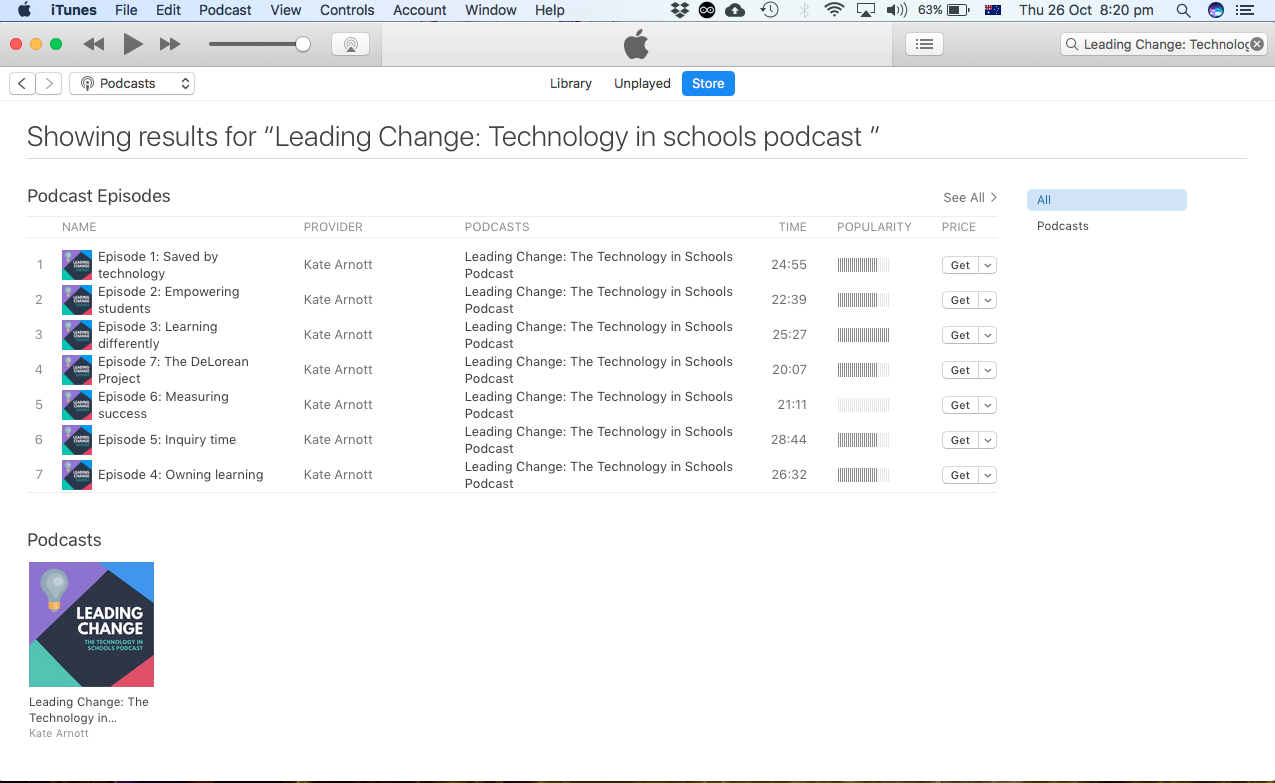 iOS 11 has just been released and it offers many new features some of which I have commented on at the end of this post. The main aim of this post though is to focus on two of the more significant alterations to the previous iOS. These are the ability to screen record and Apple’s new ARKit (augmented reality).

Apple’s new operating system iOS 11 for iPhone and iPad can be downloaded to the following devices (source – MacRumors):

Being able to record what is happening on the iPhone/iPad screen is a great addition to the latest operating system. As teachers this function could assist us to make short instructional videos, for example showing students how to use an app or how to effectively search on Safari. These videos could be Airdropped across the class set of iPads ready for students to access during the lesson. It also allows students another way to present their learning, for example completing a presentation using Keynote and then creating a video of that presentation with audio.

“iOS 11 introduces ARKit, a new framework that allows you to easily create unparalleled augmented reality experiences for iPhone and iPad. By blending digital objects and information with the environment around you, ARKit takes apps beyond the screen, freeing them to interact with the real world in entirely new ways.” Apple, 2017

The ARKit which is part of iOS 11 provides a platform for augmented reality apps to be downloaded from the app store and used with the iPhone or iPad. It is worth noting that to get the full functionality  of ARKit you require a device which uses an A9 or larger processor. This means you have to have one of the following models: iPhone 6s, iPhone SE, iPhone 7, iPhone 8, iPhone X, all iPad Pro models and iPad Air 2017 (5th Generation). For most of us we will be consumers of the augmented reality apps developed to use with ARKit as opposed to creating and developing apps.

The following videos are examples of applications created to take advantage of Apples ARKit.

The new IKEA Place app lets you select items from the company’s vast product catalogue and drag them into your own home. Source

My Very Hungry Caterpillar AR by Touch Press, the company behind the award winning iOS, Android and Windows apps based on the book, will see you nurturing your very own adorable caterpillar, playing with it and helping it grow a garden. Source

Using Apple’s AR framework and the nothing more than the camera sensor in your iPhone or iPad,  the FREE MeasureKit  App can measure just about anything without hunting down a ruler or tape measure. However, unlike a ruler, MeasureKit provides precise dimensions not just for height and width, but also measurements of distance, angle, trajectory, level, square, and more. Source

Note: The following information is taken directly from forbes.com

Do not disturb while driving

The Do Not Disturb feature is known for being useful by preventing notification noises while you are sleeping. Apple enhanced the Do Not Disturb feature by providing an option so that you do not get distracted while driving. When you start driving, your iPhone will be able to sense that you are in transit so it can prevent you from being disturbed with phone calls, text messages and notifications. People that try to reach you while Do Not Disturb While Driving is activated will be notified that you are not available right now. Source

iOS 11 is bringing a new app to the iPad called Files. The Files app allows users to search, browse and organise all of your cloud and locally stored files. This includes files stored in cloud services such as Apple iCloud Drive, Box and Dropbox. You can also bookmark your favourite files in a folder on the sidebar called “Favourites.” The Files app on the iPad now feels more like a computer desktop. Source

The Control Centre has been completely redesigned in iOS 11. And now you can customise it with different shortcuts and preferences. For example, you can add the ability to dim the lights, control Voice memos and place a shortcut for Low Power Mode. And applying 3D Touch (long hold instead of tap) to the Control Centre presents additional controls. Source

AirPlay 2 support is integrated in the Home app for iOS 11. And with the AirPlay 2 integration, you can control the volume and playlists for the smart speakers in each individual room from the Home app. This allows different music to be played at different volumes from the one device. Source

One of the best new features coming to iOS 11 is Indoor Maps in the Maps app. With this feature, you can view the indoor maps of hundreds of shopping centres and major airports. Now you can see which restaurants are beyond security at airports and the stores that are on each level of the mall. Source

The Notes app now has a Document Scanner function that can automatically detect when a photo of a document is taken. And then the Notes app automatically crops the edges and removes tilts and glares. Plus you can fill in the blanks or sign it with the Apple Pencil. Once you are done editing the document, then you can export it as a PDF or document file. Source

There are significant benefits to communicating a child’s learning to parents outside of the traditional term report, take home book and parent teacher interview. This post looks at two ways to engage parents and caregivers beyond the traditional structures schools put in place to connect student learning with home.

The following are benefits resulting from increasing parent involvement in a child’s learning:

To see another 16 reasons why engaging parents with their child’s learning is important click on the following link: Excerpt from Home-School Relations: Working Successfully with Parents and Families, by G. Olsen, M.L. Fuller, 2008 edition, p. 129-130.

The following two communication methods are practical examples of how classroom teachers can connect with parents. Both methods have been successfully used this year by Kelly and Ange.

Kelly uses the Seesaw app  (available on Apple and Android devices) which allows moments in time to be captured via image or video along with student or teacher comments and made available instantly to the parent of that child. If time does not allow for sharing instantly then video, images and comments can be uploaded later at a more convenient time. It allows Kelly to create portfolios of work for each child with control over what is posted, who can see it and when it is posted. These portfolios can be divided into subject folders.

The benefits that Kelly has found by using Seesaw over traditional take home books include: 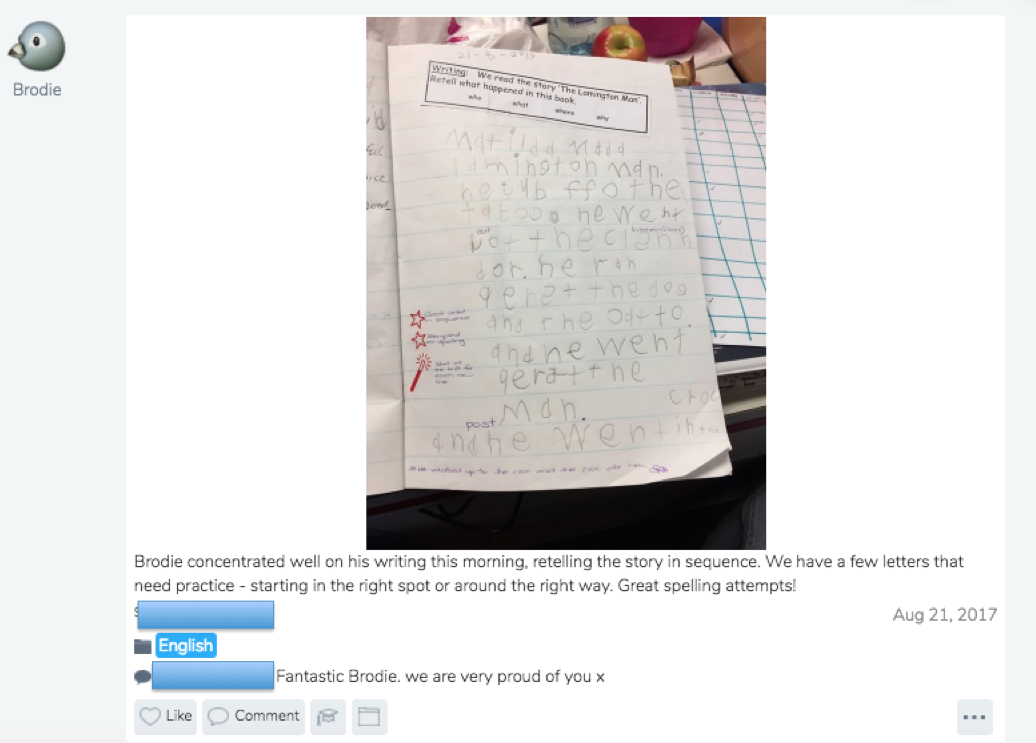 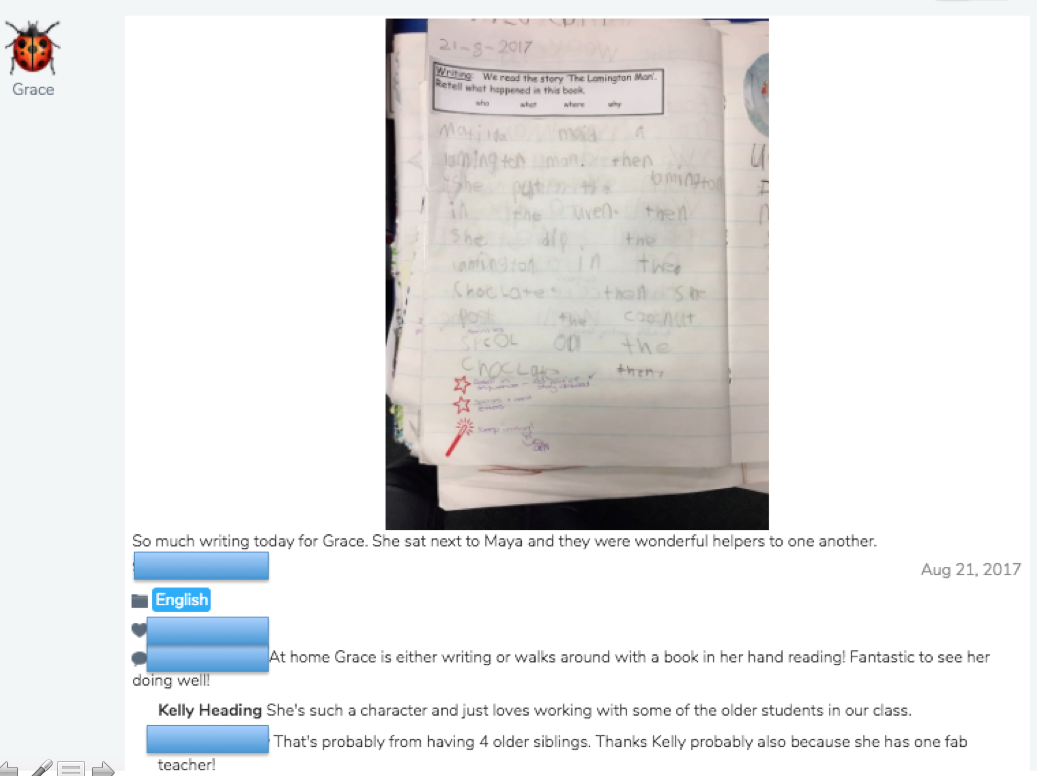 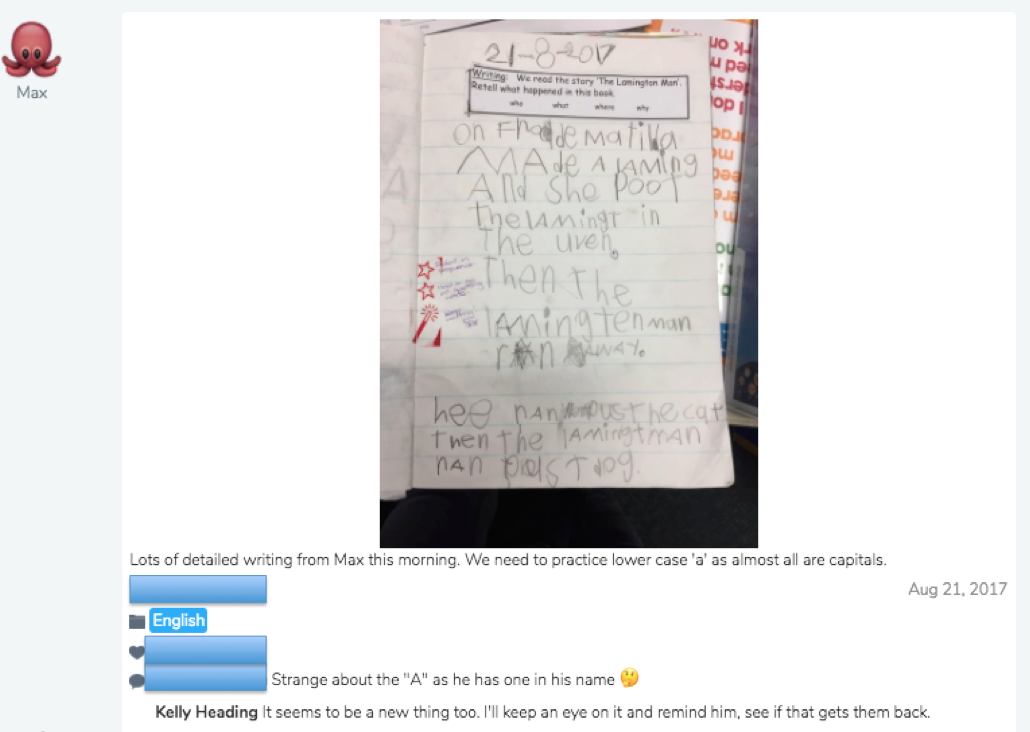 On Thursday of week 10, term 3 Ange invited parents in for the last lesson of the day to have her students show parents some of their learning. This began by showing parents Mindset videos students had made around the topic of maths. This was very powerful as not only was it reinforcing the importance of mindset to students but it was educating parents at the same time. This means that a certain level of consistency has been created between what students are learning and what parents understand to be happening in the classroom. Students then took parents out into the wet area and demonstrated their coding skills with the Bee Bots. The students final task was to show their parents two Keynote presentations which had been made on the iPads. Students had to go through their presentations explaining the content they had created. One presentation was on spiders and the other on a country of the students choice. 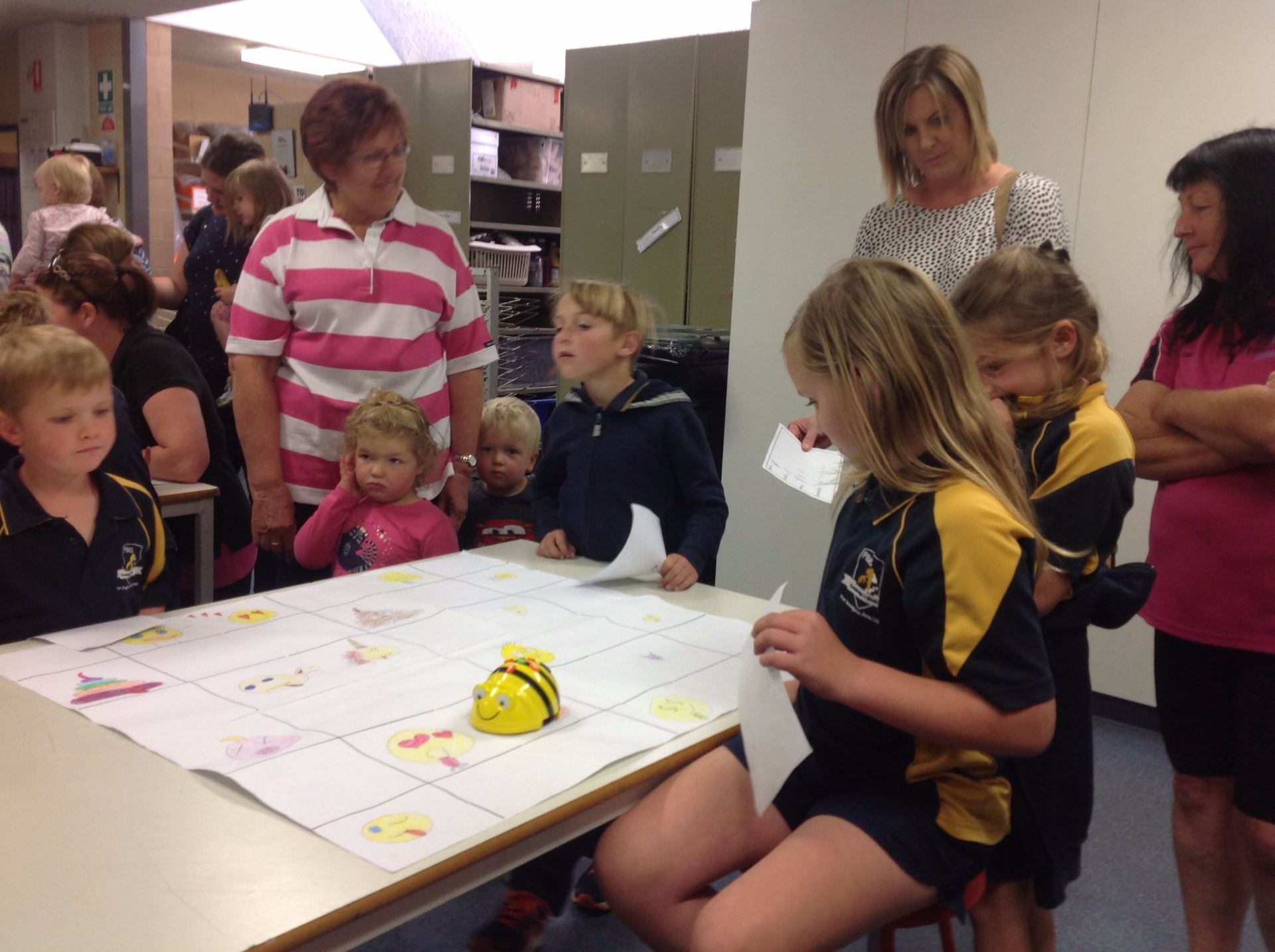 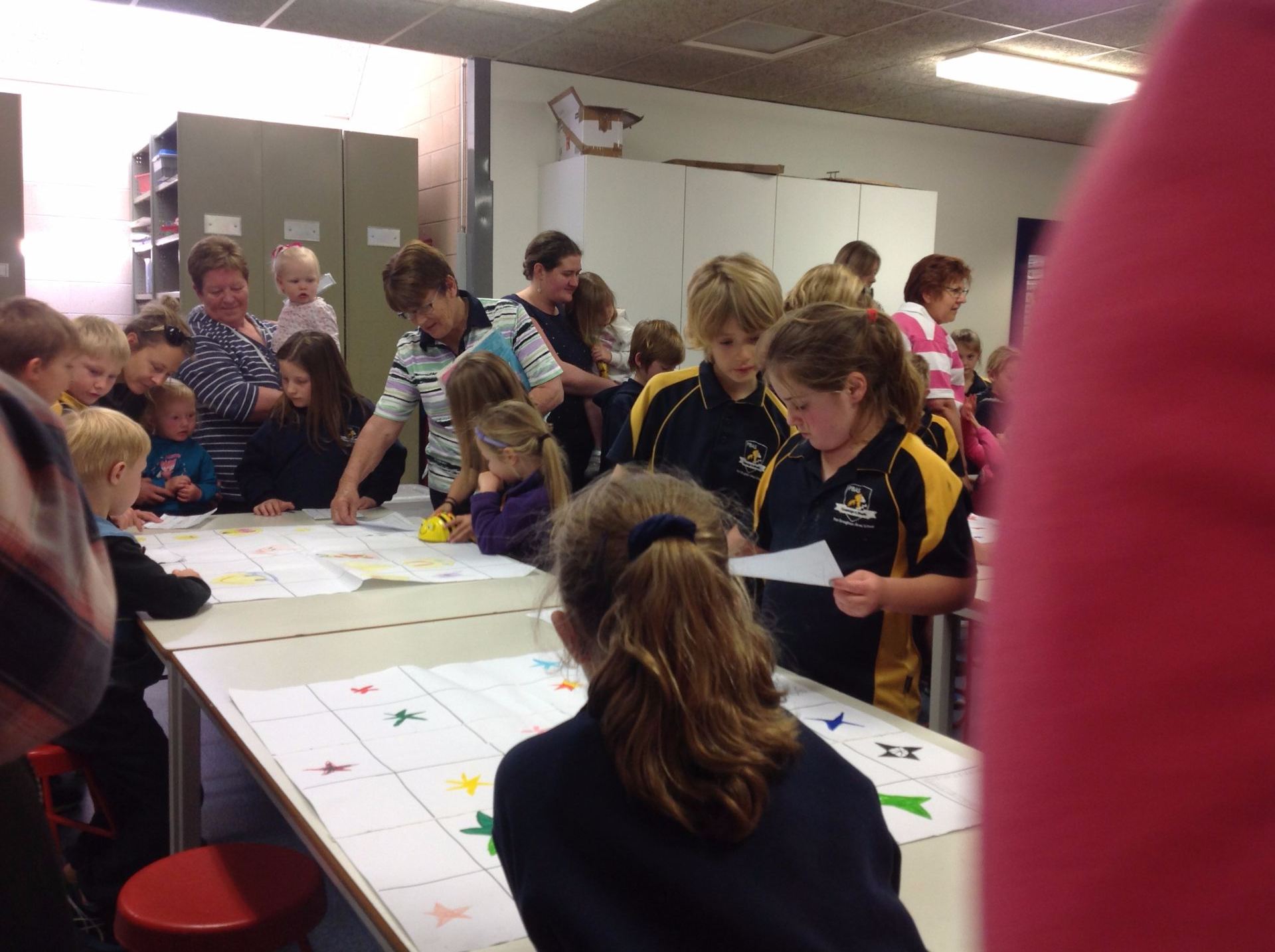 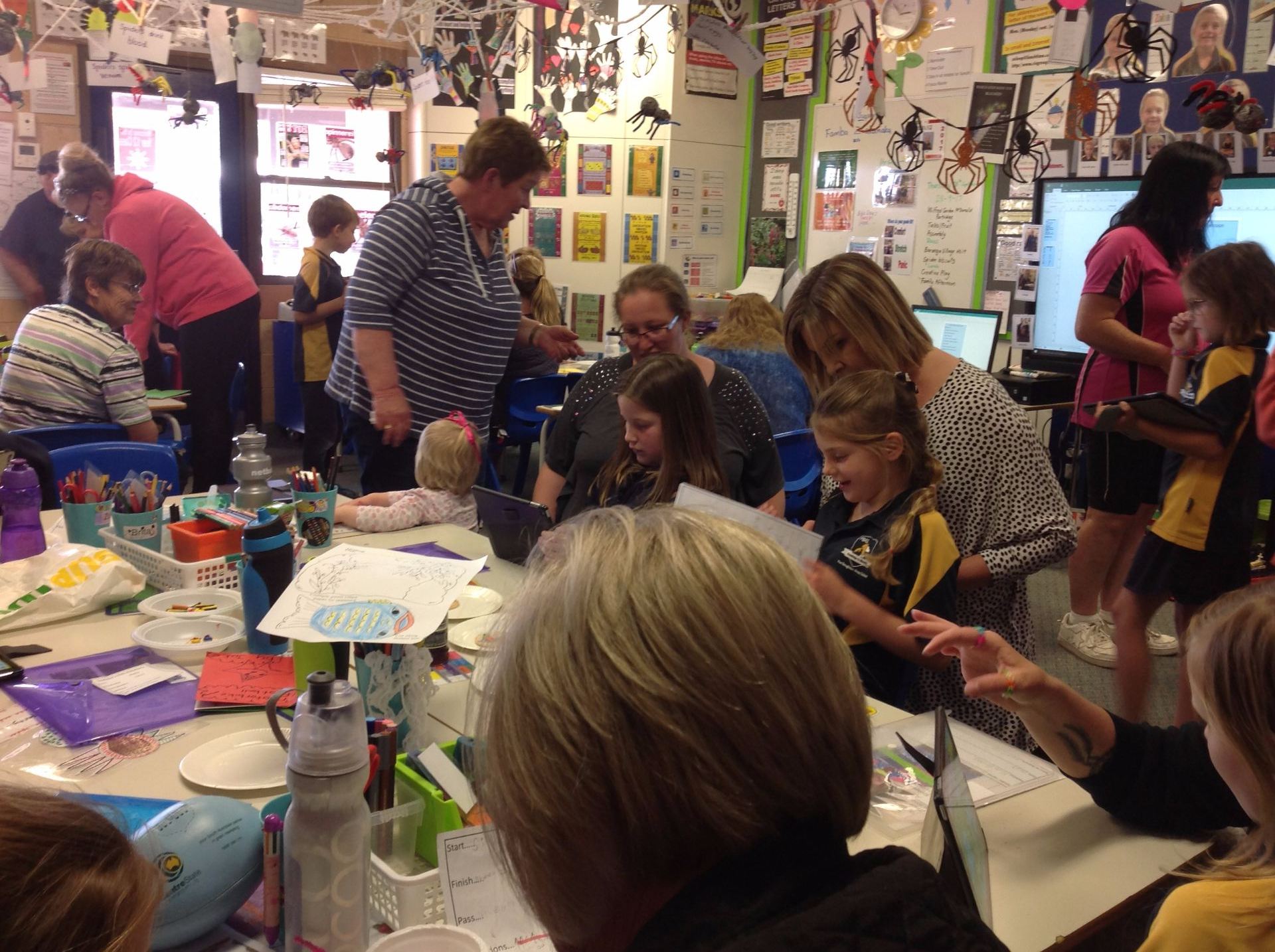 Ange’s classroom was packed with parents and caregivers all keen to see what their child had been doing. Every child had an adult attend.

Having had conversations with the parents and teachers involved in these communications methods it is clear there has been some significant upside including improved parent understanding of the curriculum and the teacher’s role, improved parent perception of the school, improved parental engagement in student learning and a sense of job satisfaction felt by the teacher.