During term 1 our Year 3/4 class looked after and hatched baby chickens in the classroom. This was done through a program called Living Eggs. Jackie organised all the resources required to set up and hatch the eggs through the Living Eggs program. The class was supplied with fertilised eggs, incubator and other materials needed to successfully hatch and look after the chicks.

A brooder box complete with heat light, bedding, feed and waterer is supplied which allows teachers and children easy observation and access to the chicks.

Teachers Resources, including hundreds of activities directly linked to the National Curriculum are supplied on a CD with the kit.

Colourful wall posters are supplied depicting Life Cycles and Embryo Development, depending on your pupils’ ages.

The kids were very excited throughout the whole program particularly when the eggs hatched. Watching the chicks breaking the eggs and coming out was definitely a highlight for the students (and staff) who got to witness it happen. For those of you who missed the chicks hatching there is a video below.

Student Power Point Diary – All students kept a diary from the time the eggs arrived to the time they left the classroom to go to their new homes (lucky students got to keep the chickens). 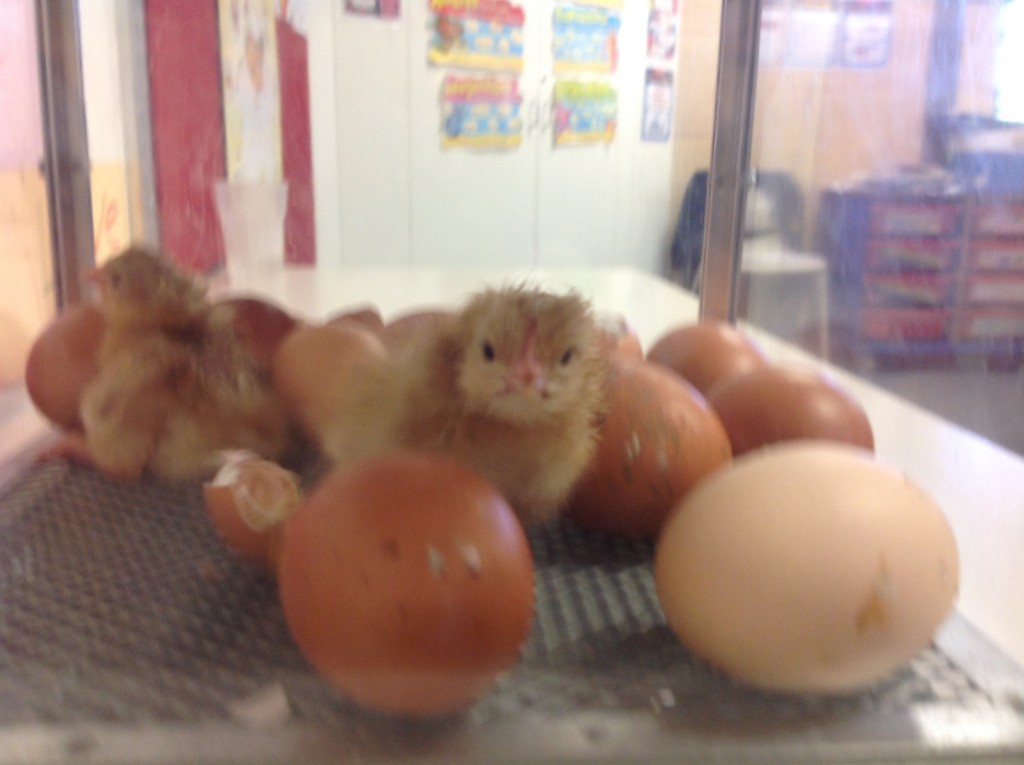 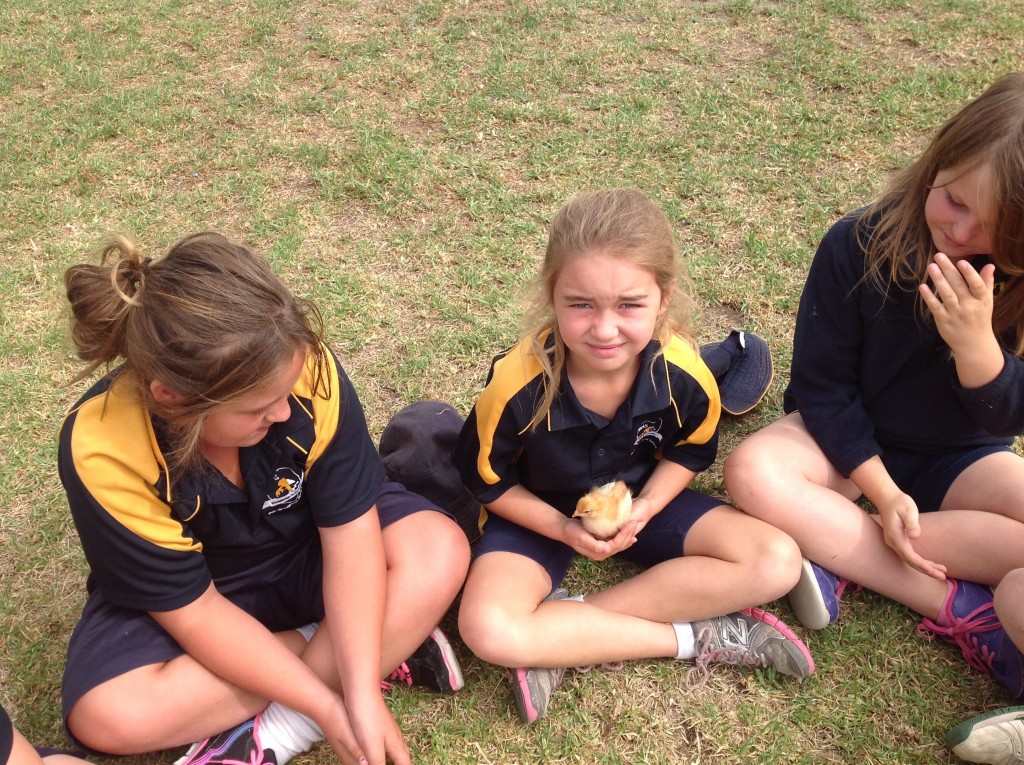 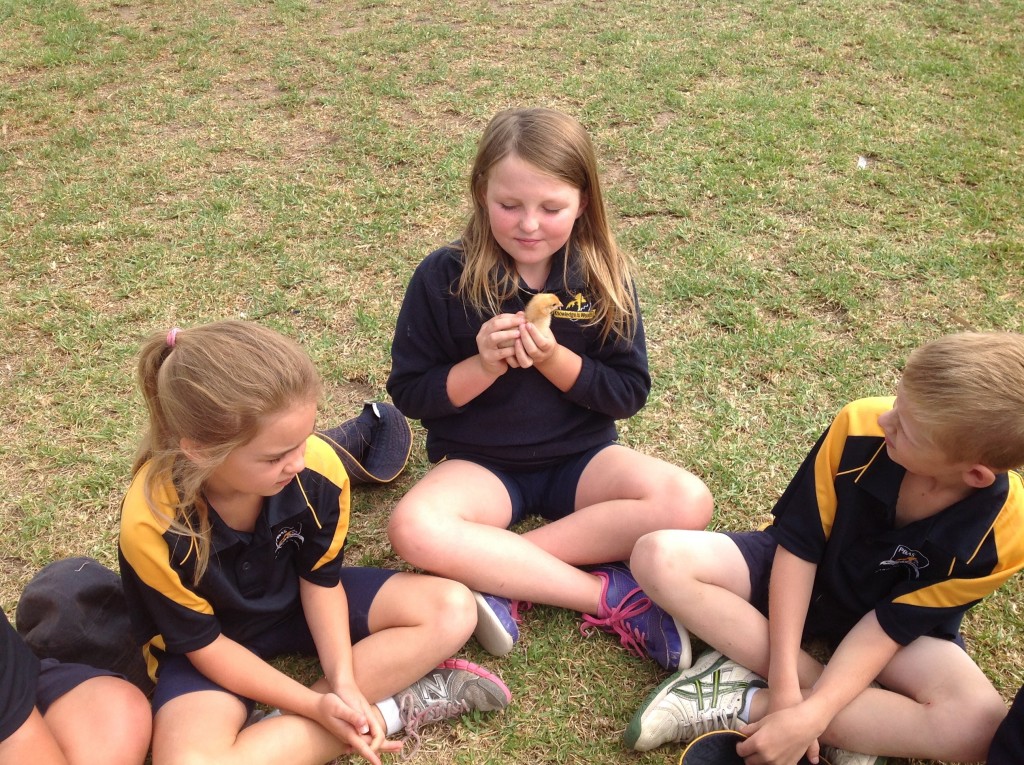 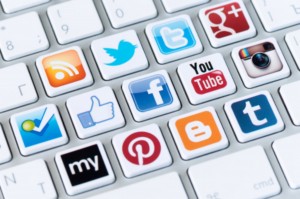 Social media in schools provides a powerful tool for communicating with parents and students, supporting student learning in the classroom and opening up professional learning opportunities for teachers. From personal experience using social media platforms on a daily/weekly basis to do these things including Facebook, Twitter, Podcasts, You Tube, blogs and closed platforms like Edmodo support us to:

Listen to Professor Stephen Heppell discuss his views on social media in schools.

Professor Stephen Heppell – “One of the most influential academics in the field of technology and education globally”.

The following is an article titled Dear Ms Morgan: Your guidance is a mini syllabus on how to wreck poetry from The Guardian website written by Michael Rosen.

The main point raised in the article is around large scale testing requiring one right answer. There is no scope for imagination or thinking in a different way. We can’t have a range of correct answers, how would markers (human or computer) ever agree upon what was correct!

In the UK the Standards and Testing Agency produce National Curriculum Assessments (think NAPLAN). This test assesses the new UK ‘National Curriculum’ for the first time in 2016. If interested you can view the Key Stage 1 English Reading test here.

Dear Ms Morgan: Your guidance is a mini syllabus on how to wreck poetry

Along with many other poets, I receive many invites to go into schools to share my poetry with pupils, to talk about how and why we write and read poems. I’ve been doing this since 1974. We think it’s a good idea because teachers, children and poets value poetry. If you put a group of poets, teachers, pupils and parents in a room to talk about why we do this, we come up with a wide range of answers. Here are some I’ve collected: it’s a good way to open up conversations about our lives, experiences and feelings; poetry often uses the sound of words to express feelings without actually saying what those feelings are; it’s a good way to express “big ideas in small spaces”; suggest things without necessarily coming to a conclusion; express a single moment without necessarily relating the consequences; play with language without it having to be literal; confess things about our lives; soap-box about our beliefs; express identity and culture; and, because it “borrows” voices from a wide range of sources (including poetry itself), it has an infectious quality that enables many of us to imitate it, parody it, learn it and play with it. We are able to do all this without any direction from on high. We just do it.

What messages about poetry does this guidance give? That we read a poem in order to “retrieve” exact information from it
Now, though, there’s an official view of what poetry is for: “Standards and Testing Agency, Key stage 1 English reading, sample questions, marks schemes and commentary for 2016 assessment”. Here we find Where Go the Boats? by Robert Louis Stevenson, followed by eight questions, their correct answers – that’s to say, the only answers that are allowed, and a commentary to explain what’s being tested. This will lay down the activities of thousands of teachers, children and parents between now and May 2016. Thousands of hours of school – and homework – time will be focused on these correct answers. It’s no use you, or any Ofsted report, telling us that it’s only bad teachers who teach to the test. Because of your system of enforced conversion to academy status on the basis of schools not scoring high enough on tests, schools will teach to the test. Inevitably, this test will enforce what reading poetry is about and what it’s for and that doesn’t coincide very much with what poets and people interested in poetry have to say about it.

What messages about poetry does this guidance give, then?

First, we discover that we read a poem in order to “retrieve” exact and correct information from it, and we are supposed to “infer” exact and correct meanings from it. This means that it’s not for speculation, interpretation, or for making a connection between the reader and the poem at the level of empathy – that is, sharing our thoughts and feelings. Instead, a poem is a chunk of language to be used for purposes seen as important by government-hired experts. It’s irrelevant whether these have anything to do with what poets try to do, but then who cares if this test runs counter to what poets think?

The “commentary” refers to pupils having to identify rhyming words and “simple literary language”. The example given is the phrase “on either hand”. But this is not literary, it’s a common everyday oral metaphor. Spotting rhyming words is a way of turning rhyming poems into train-spotting, the great advantage for examiners being that there are only right and wrong answers. It has the disadvantage of separating rhyme off from everything else a poem does in order to make the rhyme work – rather as if the only thing we notice about a game of football is the goalscorer. And it will set in motion thousands of hours of rhyme-spotting lessons, so defining poetry falsely for thousands of people between now and the test.

One question asks the pupils to “find and copy the line that tells you that the poet is not sure where the boats will end up”. There is of course only one correct answer: “Where will all come home?” In fact, I spotted another couple of lines that suggest being not sure. Meanwhile, the examiner hasn’t noticed that it’s not “the poet” who is in this poem, it’s a child who is playing with boats. That’s how many poems work. Welcome to literary language, Mr/Ms Examiner.

A further question asks: “What would be another good title for the poem?”. There are four possibles and you’re only allowed to pick one. This is a gross distortion of the poetry-game that some of us play, where we do indeed invite children to come up with alternative titles as a way of talking about possible and interesting interpretations, not one correct one out of four.

The final roadcrash comes with “Why does Robert Louis Stevenson use a question for the title of this poem?” There are of course many possibilities here – including the entirely legitimate answer, “we don’t know” – but the only ones allowed must include the idea that the poem gives “answers” (really?) or that the poet (!) doesn’t know where the boats will turn up. If I had written, “because a lot of poems eg Who killed Cock Robin? begin with questions”, I would have been wrong. So, what we have here is a mini-syllabus in how to wreck poetry for five- to eight-year-olds. Thank you, Ms Morgan.

If we are assessing against the Australian Curriculum using the Achievement Standard then the answer to this is no.

There will be some out there who say, “Well I have never weighted tasks”, and at the risk of generalising most of these teachers will be primary. Then there are those of us (including me) who say, “I have always weighted my tasks.” The majority of those will be secondary teachers. Our reasoning? Because some tasks are larger and more complex and take more time, effort and knowledge to complete successfully. Our tasks will always continue to have varying degrees of complexity but the Australian Curriculum does not accommodate weighting aspects of the Achievement Standards.

Taking this from a personal perspective I had not considered not weighting my tasks until now. I have done it every year for 18 years. Until now I haven’t thought twice about applying a higher number of marks to certain aspects of my HPE courses than others.

What is the problem with using weightings to assess the Australian Curriculum?

For those of us who traditionally weight our tasks we would use some form of the above example. This style of assessment weights certain aspects of the Standards higher than others, which is not how we should be using the Standards.

Lets assume for the sake of this example that each aspect of the Standard is weighted equally within the assignment.

It is inappropriate to weight some aspects of the Standard at 7.5% while allocating others only 4% when both are considered of equal value.

The Australian Curriculum provides an Achievement Standard as a broad descriptor whereas in the SACE a Performance Standard is referenced through weighted components and an accompanying assessment design rubric. As teachers of the AC we are required to assess students achievement based on a portfolio of evidence gathered over time. That evidence is gathered from assessment tasks that give students opportunities to demonstrate learning against aspects of the Achievement Standard. If we can provide those aligned assessment tasks and students submit the work our role is to determine to what degree have they provided that evidence. So we determine the level of achievement (A-E) and we can develop specific criteria that help us to separate student’s level of knowledge and understanding. In a perfect world an appropriate moderation process with peers would help us confirm at what level students have achieved and improve our confidence in making those judgements.

The purpose of this post is to get teachers to reflect on their assessment practices in relation to the Australian Curriculum. The idea of not weighting tasks is one I only arrived at the other day after a conversation with Tyler and Joelene. Some of you may have already considered this concept while others may not have. During early term 2 there will be some discussion to allow teachers to put forward their thoughts and opinions. In the mean time if you wanted to contribute to the comments section of this post with your thoughts that would be most appreciated.